The difference between 120 volts and 240 volts

Should we discuss 120/240 volts or 110/220 volts? Many people still raise this question. The 110/220 volts has become a folkloric term still largely embedded in popular thought. Some people will even speak of 115/230 volts. The confusion probably comes from the industrial sector which displays different numbers on the nameplates of units they manufacture. For the sake of standardization, we must know that the main producers of electricity in North America provide the residential sector with 120/240 volts having variations of plus or minus 5%.

Now what is the difference between 120 volts and 240 volts? Why do some devices work with one or the other of these voltages? In fact, everything depends on the demand for operating the device. To understand the electrical phenomenon, imagine that devices that are used in the house operate with water. The energy required would be neither more nor less than the flow of water the device would need to function. One can easily imagine that a simple TV would require a water flow much smaller than a dryer. Therefore logically we should rely on a small water hose for the TV and one large hose for the dryer. 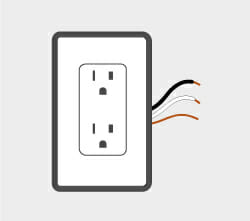 Let’s set aside the water and get back to electrons. A standard outlet providing 120 V is usually connected by a three-wire cable: a black insulated wire that transports electrons, a white insulated wire called the “neutral” and a bare copper wire which is the return to ground.

For example, a cable used to power an electric baseboard; operating at 240 V has three wires: two insulated wires found in different colours (often red and black) transporting electrons and a bare copper wire for the return to ground. 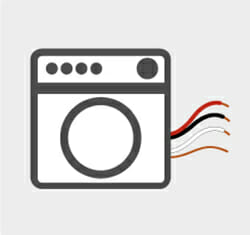 An outlet for connecting a stove or dryer is powered by four wires: two insulated wires found in different colours (often red and black) for the transport of electrons, a white insulated neutral wire and bare copper wire for the return to ground. In this case, the electric stove or dryer needs 240 V (both coloured wires supplying the heating elements) and 120 V for its accessories such as the control panel or the lighting function.

Generally in your home, you will need to connect your heating products to 240 V.